Washington, D.C.: The Government Accountability Project (GAP) has learned from inside sources that World Bank President Paul Wolfowitz is currently negotiating a contract with a new resident Iraq Country Director. This step strongly suggests that Wolfowitz intends to expand Bank-funded projects there dramatically in the near future, despite the deteriorating security situation and recent disclosures of massive corruption in "reconstruction" efforts.

This development bears out the fears expressed by senior career staff and Board members when Wolfowitz was appointed by the Bush administration in June 2005. Only three months after Wolfowitz' arrival, the Bank's Board tried to restrain his management of World Bank operations in Iraq explicitly, issuing an unprecedented directive to his office to "[K]eep the Board regularly updated on developments in the country (Iraq) and implementation of the ISN" (Interim Strategy Note, September 2005, see GAP Web site). One year later, 30-year veteran Christiaan Poortman, vice-president for the Middle East, resigned from the World Bank rather than comply with Wolfowitz's directives to prepare to increase lending and add staff in Iraq.

The unilateral appointment of a resident Iraq country director can only aggravate an already tense standoff between Wolfowitz and the Bank Board. Members of the Board have already expressed concerns about misuse of other donorsí funds in the country and emphasized to the US-appointed President ". . . the need for compliance with the Bank's fiduciary and safeguard requirements," also according to the ISN 2005. 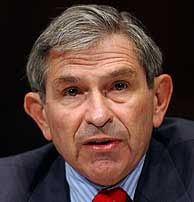 "Wolfowitz's apparent determination to use the World Bank to further questionable American military goals in the Middle East is a fundamental distortion of the Bank's mission, a violation of its founding Articles of Agreement, and a reckless waste of donor resources," said GAP International Program Director Bea Edwards.


Appointing a resident Country Director for Iraq now puts Wolfowitz in opposition to Board members who have expressed increasing concern about the countryís deepening conflict and creditworthiness. Although the Board did approve a limited loan program for Iraq of U.S. $500 million in September 2005, funds were not approved for disbursal, as of December 31, 2006. Disbursement was contingent on "critical progress in several areas important to IBRD (International Bank for Reconstruction and Development) creditworthiness, including security and external debt-relief," according to an internal memo from December 2006 (See GAP's Web site). The required progress has not occurred. Currently, regular staff travel to Iraq is prohibited, meaning that lending operations cannot be properly monitored.

To date, the Bank has relied on Iraqi staff based in the country, meetings with Iraqis outside the country, videoconferencing facilities in Baghdad, and long-distance supervision from the Interim Office for Iraq in Amman, Jordan. The current director for Iraq, Joseph Saba, is not a resident in the country ñ due to World Bank stipulations detailing terms for re-entry into a post-conflict situation. Instead, Saba manages five countries from Washington D.C.

Unlike the current director, the soon-to-be-named country director will exclusively manage Iraq for the Bank and will be stationed in Baghdad, according to inside sources. Wolfowitz first floated the idea of a resident Country Director and staff in Iraq in May 2006, when optimists in his office predicted greater stability as 2006 advanced. But the past year has seen an increase in violence, and the Bank's lending and staffing plan remains unchanged.

"In fact, the Bank is prohibited from operating in a conflict like this," added Edwards. "In the simplest financial terms, there is no functioning banking system, the government does not control its territory and it cannot guarantee loan repayment. Any emergency or social funding in Iraq should come from donorsí grants, not loans."

To engage in Iraq, the World Bank must justify reconstruction spending on economic grounds. If the conflict is ongoing, and the government is unstable, this cannot be done. Even assuming that the conflict ends soon, which no one is predicting, Bank Procedure 2.30 ("Development Cooperation and Conflict") stipulates that, to operate in a country emerging from a conflict, the Bank must prepare a "watching brief," develop a transitional support strategy, begin transitional reconstruction, then begin post-conflict reconstruction, and finally return to normal lending.

World Bank management under Wolfowitz has not taken these steps. Naming a resident country director and sending Bank staff to Baghdad, although no solution to the conflict appears likely, signifies increasing disagreement between Wolfowitz and the World Bank Board. The Board representative for Germany has long opposed any increase in Bank activity in Baghdad. His government is worried about staff safety. In addition, poorly monitored "reconstruction" projects will constitute a lucrative new source of income for corrupt officials who are party to the ongoing conflict.


The Government Accountability Project is a U.S. whistleblower protection organization. Through litigating whistleblower cases, publicizing concerns and developing legal reforms, GAP's mission is to protect the public interest by promoting government and corporate accountability. Founded in 1977, GAP is a non-profit, non-partisan advocacy organization with offices in Washington, D.C. and Seattle, WA.
Posted by the wingnut says... at 11:20 AM

Email ThisBlogThis!Share to TwitterShare to FacebookShare to Pinterest
Labels: Money