He always played with our sense of the obvious...didn't he?
Were'nt we an interesting lot, for him.
Gonna miss his clarity and wit.


get what you deserve
Posted by the wingnut says... at 6:18 PM No comments:

Google, once a fantastic example of all that is good about Free Market Capitalism and the American Dream... now just another multinational publicly traded corporate monster. Yes Sergey Brin and Larry Page, the darling 20 somethings who, met at Stanford and decided conquer the world... Along the way they were offered an obscene amount of money to sell off their idealism to the devil... tell me, who could resist a $24 Billion IPO?

Fast forward, the company who claims its motto is "do no evil" has some interesting preactices in it gMail division... Yes as the giant internet corporations vie for total control of information, plenty of questionable evil is leveled on an increasingly uneven playfield. Lets look at their email program, which encourages people to keep their private email stored on their online servers as long as they like... because Google has so dog-gone much server space. no biggie! 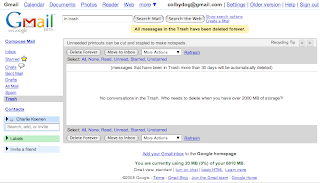 They tell you to leave you mail on their system and tease you with an "our servers feel unloved" tag if you don't acquiese. But what do they really mean when they say this? Why would anyone encourage us to be messy, to not bother emptying trash cuz they got such big wastebaskets? 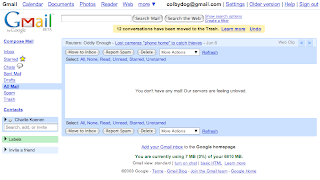 Well if the reason they want you to leave your private correspondence is so their internet bots and spiders can back up all your email into their "secure" servers... would you feel like loving their servers? True THEY may have the best of intentions for snooping on your mail... They say its only to help make a better internet experience for you... AdSense and the googleplex idea has been to learn your habits, your friends, your favorite sites and keywords... to help you find more online... And I believe them.

But ever since Dick Cheney gave Retroactive Immunity to the Telcos for giving the neocons access to our emails and browsing logs.... I really have no love for their huge servers. But I believed Google was still an honest corporation... not EVERY one is evil....

But now, their latest email feature has really got me wondering. Custom Time is is a way to backdate your emails so now you can send people emails and claim it went out on time. Have a deadline? not any more! How bout a birthday you missed? never again. Didn't file you eTaxes on time? send it dated April14th! 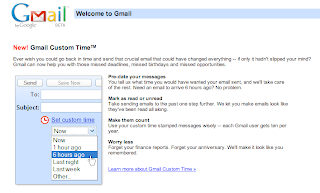 What the heck is this... Permission to lie? I think "do no evil" has been replaced with "allow for evil" - and thats just not cool. And look who's been invited to attend the ultra-secret shadow world government Bilderberg Group Meeting held last weekend in Virginia... Eric Schmidt, Eric-Chairman of the Executive Committee and CEO at Google. No conspiracy or collusion of world corporate interests there... just a myspace party...er thats murdoch's social website.
Posted by the wingnut says... at 8:20 PM No comments:

Lawrence Lessig's speech at the National Conference on Media Reform in Minneapolis. Lessig has the best interactive presentation style today... and his message is no less important. Here his point that without a fair Congress, how can we begin to reform Media? Washington DC Lobbyists have DOUBLED since BushCo took office... even though an increasing majority of citizens are against Media Consolidation... Congress continues to consolidate media to Corporations.

Before we create fair Net Neutrality Laws, we need PUBLICALLY FUNDED ELECTIONS for Congress, State and Local Government, and for our Justices...

Get Big Business out of our Business!

Minnesota Media Reform Conference has Bill Moyers' 40 minutes of truth... like light in a dark shadowed corporate vaacuum... here we are now....

We are at an historic moment in our history where we are at a confluence of events that will determine the fate of free speech and access to information for generations to come.

The 2008 Media Reform Conference in Minneapolis is the epicenter of the resistance to Corporate-Owned Media and its newest attack on public property, namely to privatize the ownership, regulation and content of the internet.

Many citizens are as of yet unaware that all forms of communication content will soon be delivered via the internet: Telephone, Television, Movies, Video-links, Information Resources, Commerce, Websites, Blogs, Magazines, News, Games and adult entertainment.

Heretofore separated into a variety of government regulated mediums, like telephone, broadcast and commerce... this new medium, "a series of tubes" as the esteemed head of the Senate department who oversees the regulation of the internet, Republican, Sen Ted Stevens, calls it, is right now having its regulatory future decided by our politicians.

The model for conducting business is migrating to online delivery and now the rules for conducting that business, the policies and regulations are being formed in Washington. So this is the time for the citizens to help guide our leadership to create responsible and fair rules to govern the use, ownership, access and content distribution of the internet going forward.

Already, mighty Corporate Communications giants are heavily lobbying Congress to privatize the internet, granting them free reign to censor, limit and control access to information and content. They are trying to erase all the regulatory laws that have governed their use of telephone and television space by rewriting the internet laws at their discression.

This revolution is going on unbeknownst to the average citizen as these same Communication Giants are doing everything in their power to squelch, censor or discredit any effort to inform citizens and policymakers to keep the internet neutral and regulated.

This is the most important battle of our time. For without neutral access to information, truth can be concealed, access can be denied, ideas can be squelched and our future can be narrowed to fit in the pocketbooks of a small number of multinational corporate feifdoms who will have ultimate control of not only our nation, but our planet.
Posted by the wingnut says... at 12:34 AM No comments: