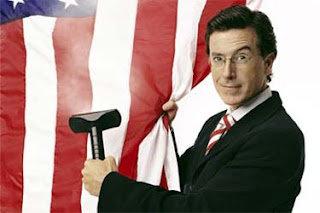 This year's White House Correspondent's Dinner had the greatest roast of a standing administration in history. Steven Colbert stood a mere meter from pResident Bush as he spoke truth to power in a way only Colbert could do. Faces in the crowd, the most influental newsmakers on earth, sat with their mouths agasp, blank stares as they witnessed a defiancy never before seen to standing power.

Several of Bush's aides and supporters walked out during Colbert's speech, and one former aide said that the President had "that look that he's ready to blow."

Prior to Colbert, Bush mocked himself with the help of a celebrity impersonator, Steve Bridges. Many bloggers would criticize the fact that most news sources focused on Bush and his impersonator, and devoted little space to Colbert, sometimes not even mentioning him at all.

Truly the greatest day for America's true patriots.
Posted by the wingnut says... at 10:27 AM No comments: