We’re seeing another very dramatic example of the Economic Shock-Thearapy right now with this extortionist kind of tactic playing out in Washington. BushCo says “Sign this blank check, or we’re all going down, Wall Street, your savings pensions and 401ks—you know, The Sky is Falling!!!” 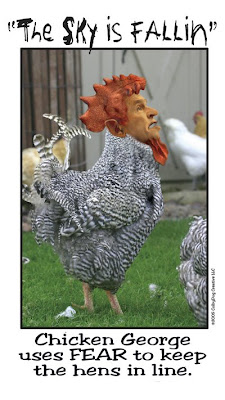 Just like the days following 9/11 when BushCo pushed through the USA Patriot Act and forced Congress to vote on a (still hot from the duplicator machines) 597 page rewrite of the Constitution before noon that day! I think most every American can agree there are many parts of that "book" that turned out to not be in the best interests of freedom and democracy. But in his rhetoric, Bush said 'yer either with us or against us' and barring our own Russ Feingold it passed nearly unanimously.


Well here we are at the autumn of the Bush residency... and here again we're facing another "sky is falling—pass this by friday" shock doctrine. The game is the same, use fear to keep the flock in line. Scare America into doing the wrong thing because its their ONLY choice... and its gotta happen by tomorrow- or else!

So what is this Economic Shock-Therapy? Milton Friedman coined it as a way to bring about radical economic changes that would normally be highly controversial—Disaster Capitalism. Following a disaster, the citizens are softened up and rally behind perceived leadership. Precisely the time to slip-in radical changes (like torture, spying, wars, deregulation and consolidation) wrapped in the form of a security blanket (or flag).

Naome Klein has written a book detailing many historic examples of this technique and its use. The Shock Doctrine gives perhaps the blueprints for todays financial shock treatment delivered by Bush's Treasury Secretary Henry Paulson.

It’s interesting who Treasury Secretary Henry Paulson is, he served as an assistant to Richard Nixon’s assistant, Watergate "plumber" John Ehrlichman. From there he moved right to Goldman Sachs, where he became the head of it.

BusinessWeek magazine ran an article just after Paulson was appointed by Bush in 2006, Mr Risk Goes to Washington, It says, “Think of Paulson as Mr. Risk. He’s one of the key architects of a more daring Wall Street, where securities firms are taking greater and greater chances in [their] pursuit of profits. By some key measures, the securities industry is more leveraged now than it was at the height of the 1990s boom." When Paulson took over Goldman Sachs in 1999, they had $20 billion in high-risk gambles—When he left, they had $100 billion.

Henry Paulson isn't speaking for Main Street, he's bailing out his colleagues for some of the very debts that he himself accumulated.

Last night the pResident addressed the nation urging Congress and the citizens to immediately accept and implement his Economic Plan. A plan he said his economic advisors have been working on for weeks. Well Folks, its all of three pages long.

Paulson said that he thought it would be presumptuous to put in clauses calling for regulation. But this is absolute nonsense. Section 2 of the same document talks about how they have the right to hire contractors to administer this huge operation, and we know that that means contracting with some of the very firms who are going to be bailed out. And then it says that it would be—they would be contracting them without regard to any other provision of law regarding public contracts.

Hello??? What are we, Iraq? This document grants complete immunity from oversight and prosecution that the contractors have in Iraq, if not more. Basically what they are saying is that Paulson can contract with private companies AND exempt those companies from the existing law. No conflict of interest, no whistleblowing, in fact way to prosecute them if we learn in six months that they've broken every law on the books.

...in times of crisis, when people are panicked, we’ve seen again and again the right push through radical pro-corporate policies, what they call “free market reforms,” precisely because it is in a crisis where the space for debate rapidly closes, and you can invoke this state of emergency to say we have no choice.

They’re getting this—they’re lobbying for this huge bailout, obviously, but this bailout is a kind of a time bomb, because it’s all these bad debts, and they are going to explode on the next administration. I mean, we know that the Bush administration has already left the next administration with huge debt and deficit problems. They’ve just exploded those, expanded them. And what that means is that whoever the next president is is going to be inheriting this economic crisis that is being exacerbated by this bailout.

Welcome to Disaster Capitalism -
and the next installment of The Shock Doctrine.

Obsession: War on the Truth

Sept 14, 2008 should most certainly be heralded as the day the term "Liberal Media" was finally exposed for the fiction from which it was coined. Yesterday a half-million of copies of a propaganda video were distributed in 75 newspapers across the US...

The Swiftboat-like 501c3 organization, the ClarionFund, paid an undisclosed amount for the inserts to be distributed in Key Swing States including the Milwaukee Journal/Sentinel, the New York Times, the Wall Street Journal and prominent papers within Wisconsin, Michigan, Ohio, Florida, New Hampshire, Pennsylvania, Iowa and Nevada. 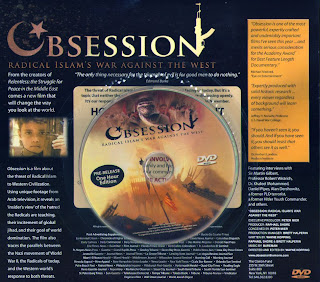 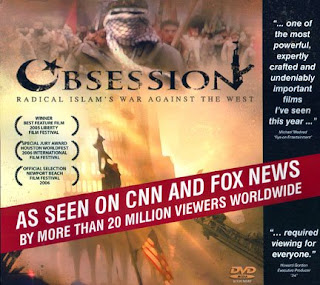 careful this is a loud and dramatic piece of propaganda...
click with care!

Obsession: Radical Islam's War Against the West, a hate-film touted as a documentary, produced in Israel by several right wing groups, who are also financial supporters of the McCain Campaign. The film played on FOX and CNN television during the run-up to the 2006 elections and has been repeatedly shown at the bush-controlled CIA and Pentagon as "learning tools" for new agents.

This propaganda is the latest stunt pulled by the right and its media partners. By reaching out to millions of readers with this ready-to-eat propaganda, they controlled the entire message without anyone being able to respond, review or refute the lies, deception and misinformation. Some newspapers who've already been inundated by angry subscribers have responded that the inclusion of paid advertisements with samples are not new.

But as one subscriber noted, "A box of cereal? Toothpaste? Does a box of cereal or a tube of toothpaste encourage me to look with hatred and suspicion on my law abiding neighbors who have a different religion than mine? The trailer for this video is about hate, pure and simple, and shows the video has only one goal -- to instill fear and hatred of neighbor against neighbor."

Touting ridiculous "awards" from right-wing film festivals like the Liberty Film Festival, this slick piece of Israeli propaganda stops at nothing to use the very techniques its sites as the "ways radical Islam and Nazi Germany" fooled their countrymen. It even goes so far as to co-opt several historic quotes by people who spoke against the very schemes and techniques THEY are using... to rally support.

People, you should be outraged. This is a blatant propaganda piece sponsored by a foreign nation, used to coerce the voters of the US to throw another election. If this is what we can expect from for-profit papers and media consolidation, this will become the future of propaganda.

Rich elitists, Multinational Corporations and Foreign Nations with deep pockets, can fabricate lies and deception with flashy packaging and full motion video to reach millions of voters. People, if we tolerate this violation of our public trust, we've truly lost our democracy.

What are you going to say to big media? Will you hold them accountable for the information they provide- or will you quietly sit by and watch fourth branch of government become as corrupt as the rest?
Posted by the wingnut says... at 11:39 AM No comments: