Wolf in the World Bank 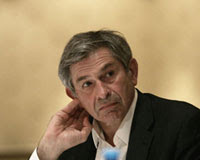 Today it was released that neocon PNAC author and thief of Baghdad, Paul Wolfowitz- the Bush anointed President of the World Bank... has been exposed for yet another series of serious corrupt practices involving some of his staff. This, after the Wolf's first order of business when assuming the throne of the world's humanitarian lending institution, was to clean house of corruption and nepotism....

But as seems the trait of the Bushmen of Washington, what's good for the people, does not apply to the rulers, is the rule at the WB too. Wolfowitz, against World bank policy, was dating Shaha Riza, 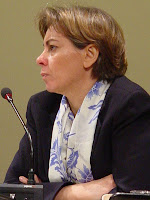 a gender specialist and senior communications adviser in the World Bank's Middle East Department (gee perhaps thats how he managed to gain access to the economic data for his hit-men to prey on helpless nations??)... As rumors leaked of their courtship a few years ago, Wolfy tried be removed from the rulings, but had to settle for getting her another job outside the World Bank.


Policy of the World Bank is to forbid any relations with subordinate workers. So Wolfy, got her a sweet tax-free job through the State Department, at an NGO that works with the World Bank by calling Condi.... so now that she didn't work under him, she was free "work" under him... and the worse part, the international NGO had her salary paid by the World Bank!

But wait, there's more! If that don't stink enough, not only did she get hired with none of the normally strict approval processes, she was paid twice the starting salary, and recently got another enormous pay raise of double the limit of raises for the organization. She is the highest paid person in the State Department... making more than Secretary of State, Condolessa Rice! (but then again Condi is black)

Now it turns out there are several other staffers Wolfowitz brought on board with ridiculous salaries and circumventing normal approval proceedings. Of course knowledge of this sent shock waves through rank and file at the World Bank-many of whom suspect Wolfy to have a hidden agenda. Nations and lenders were outraged at the behavior...

Why even the Wolf himself expressed anger and vowed to take decisive action.... but not against him or his staff.... no... against the leakers of this information!!!

This on the heels of the revelations of Wolfowitz collaborating with RNC billionaire Vulture Funders to extort billions of dollars in debt relief from third world nations.

Is there anyone who can still keep a straight face and say they are Bush Supporters who aren't ripping off our nation's wealth???

Are citizens ever going to stand up and demand punishment for these acts of treason.... or at least criminal corruption! NO its not good enough to demand his resignation—throw the bastard in jail! - Gitmo sounds like a nice place! 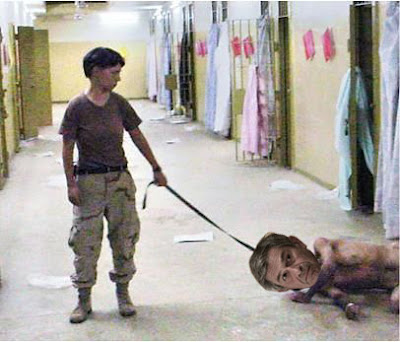 Followup- heres what he said the next day... "He's Sorry" - in true NeoCon fashion... thats suppoed to mean he keeps on working an we just ignore what he did... Well the banks board is asking him to resign... we'll see if he honors his word of "doing what they request" as much as his friend King George has done about bringing to justice anyone who had anything to do with the outting of Valerie Plame....

Here's more about his job and his his troubles from Times UK.

The latest from the NYT about his"terms for resignation" —gee quite the about face from his "noble" rhetoric about doing the right thing... or perhaps he really meant doing the "right" thing... lets hope he gets whats coming to him. The Wolf may finally be ousted from the henhouse... but will his legacy live on? And where does an ousted Wolf go next???

And more on his trying to weasel out the blame... what a snake.
Posted by the wingnut says... at 4:40 PM

Email ThisBlogThis!Share to TwitterShare to FacebookShare to Pinterest
Labels: Corruption

Check it out, a solar powered chariot propelled by George Bush!

Finally George Bush works for us! THis is such a fun invention and really speaks to our needs and abilities to create a brighter future if only we put the people like George Bush to work for us... rather than them enslaving us to do their bidding.

A brighter future is only a notion away... believe.
Posted by the wingnut says... at 9:16 AM No comments: