Ignorance Killed Easter Island- Are We Next? 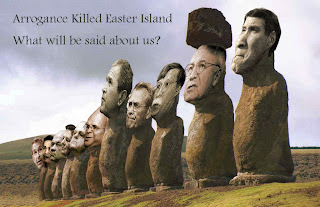 Jared Diamond, author of Collapse, writes of Easter Island. Once, it was home to a thriving culture that produced the enormous stone statues that continue to inspire awe. It was home to dozens of species of trees, which created and protected an ecosystem fertile enough to support as many as thirty thousand people. Today, it's a barren and largely empty outcropping of volcanic rock. What happened? Did a rare plant virus wipe out the island's forest cover? Not at all. The Easter Islanders chopped their trees down, one by one, until they were all gone. Once the trees were gone, the civilization collapsed and spiraled into cannibalism. Trees were the only means to make the canoes used to fish for food. "I have often asked myself, 'What did the Easter Islander who cut down the last palm tree say while he was doing it?'" Diamond writes, and that, of course, is what is so troubling about the conclusions of "Collapse." Those trees were felled by rational actors-who must have suspected that the destruction of this resource would result in the destruction of their civilization. The lesson of "Collapse" is that societies, as often as not, aren't murdered. They commit suicide: they slit their wrists and then, in the course of many decades, stand by passively and watch themselves bleed to death.

Diamond continues. "The values to which people cling most stubbornly under inappropriate conditions are those values that were previously the source of their greatest triumphs over adversity."

Actually, the inhabitants of Easter Island were doubly unfortunate – when their
environment collapsed they had nowhere else to go. The example of Easter Island should be chillingly obvious; thanks to globalization, we on planet earth are as interconnected and isolated as the clans of Easter Island. Their fate may serve as a metaphor for a potential worst-case scenario awaiting us.

Hey but its only our children and their children who will suffer for our actions today. One has to wonder what will the children say of us and our edifices to excessiveness

Save the embryo, kill the planet.
Drainability not Sustainability.

While its getting hot and sticky here in Wisconsin- the real heat and stickiness is happening in Washington... and Representative, Jim Sensenbrenner, seems a major source of that hot air and stickiness.

I was raised a few blocks from Jim Sensenbrenner's Shorewood home... I used to walk past his house to Lake Bluff grade school... in fact as a child, I used to avoid stepping on the sidewalk divide lines in reverence to a man my parents supported... Today, this man is conducting an arrogant abuse of power- the likes of which our fine State hasn't seen since Sen Joe McCarthy became the scourge of Wisconsin history. I realize many of you receiving this may be fond of- and supportive of this man... and I grant you at one time, I thought he represented his people in washington.... after all- he is OUR representative!

So before you send me a courteous please remove me from this list response and return to your busy life, please take a moment to view the real life conduct of this arrogant, abusive, and dangerous person... who is OUR elected official... representing the 5th congressional district of Wisconsin, a BLUE state! For other, just send tis on to all your contacts.

For anyone to whom I am cc'ing this correspondence who has not watched the hearing last night, it can be found on www.cspan.org in the center of the page under Video/Audio with the heading:  House Hearing on Patriot Act Reauthorization (06/10/2005).

Look at the facts... not the news media spin. Watch the behavior and actions of this man with your own eyes... without editing, or bias, or media commentary- Watch how the United States is conducting it's business.

I urge you to write him a letter responding to his conduct and his attitude while residing as chair of this important and controversial fact-gathering session. Is justice being served?

This man deserves the same treatment as Sen Joe McCarthy... to be removed from office and remain another timeless reminder of what happens when the American Public is misled by the arrogant self-interest of a small ruling class.

As many of the people in the US during the communist witch-hunts of the 1950's would say, and as many of the citizens of germany up to and during Nazi rulership... "we didn't know any better". Well consider this another chance to become aware.

This is your country... so ask yourself, what have you done for it lately? There has never been a more urgent time to participate in the political process than now. With corporate control of media, legislature, the soon the judicial system, your financial, agricultural and entertainment lifestyles are being created for you, not by you...

While its easy to go on thinking otherwise, the facts are becoming widespread, and hard to refute. The arrogance some of our politicians display in the presence of the collective ignorance of our nation's upper-middle class is soon going to give way to a reckoning- likes of which will rival the failure of McCarthy's communist witch-hunt, and the realization of Hitler's abuse of power.

If you continue to render a blind eye to the FACTS, by choosing to watch, listen and read the "news" from corporate media giants like GE, Viacom, ClearChannel, Turner, Murdock, and Disney... or if you want to think PBS is still unbiased and a good place to hear both sides of the debate... then be warned that this was another wake-up call.

You are not going to learn about the issues that matter to you on television, radio, or newsprint that is holds its own interests before presenting facts... take another moment to bookmark the daily independent media news show on www.democracynow.org just look at the real news happening to your world... not this fiction about Michael Jackson, StarWars, and who Tom Cruise is dating.

Please take the time to learn the truth, then hold your leadership accountable for their actions. It is not acceptable to simply take what they are feeding you because it is cheap and easy.... unless that is your measure for quality of life?
Posted by the wingnut says... at 11:17 AM No comments: