Once again the Bush Administration shows those watching... that they could care less about our planet and the things that live on it... Except for THEIR interests and need for "national security". Bush policy has long been suspected of having ulterior motivation - either that or they are the most incompetent and inept group of businessmen to ever steal their way into power and bankrupt the most technologically advanced culture in modern history...

Today yet another example of how the neo-con need for funding its defense contractor buddies outstrips any care for citizens, animals, nature or protection of the planet's resources. How far is Cheney willing to go ignoring environmental law when it comes to his personal piggy bank, the principal shareholders of the multinational energy, defense, monetary and chemical corporations?

Yesterday in an all-to-typical split decision of the 9th circuit appeals court, right-wing judges placed by this administration and its predecessors, decided to overthrow a lower court's decision to uphold the ban on the military using a new sonar device in its submarines that is so powerfully loud, that it has clearly been proven to harm undersea life! -Its also the first presidential override honored since a 1972 law gave states the right to review federal activities that affect their coastal resources.- but clearly no legislating from the bench here.... just acting out marching orders.

One can only assume that the Bush administration's "intelligence" fears AlQaeda is plotting an attack underwater... Presumably Cheney's intel-experts have "undeniable proof" that Bin-Laden has been building " a new breed of silent-running submarines" in mountain caves of Tora Bora... Maybe using that yellow-cake that Valerie Plame's husband "discovered". Or maybe that earthworm gear thingy from that Clancy novel starring Shaun Connery... 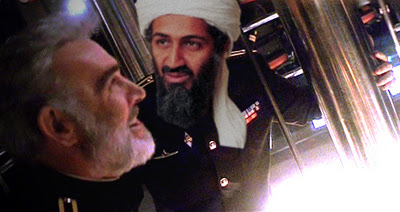 They must have classified satellite imagery of these submarines being transported by sherpas down the mountainsides, hundreds of miles across the desert to the Straits of Hormuz where they are no-doubt being deployed to attack our fleets- but of course they can't actually SHOW US them cuz it risks national security and all! 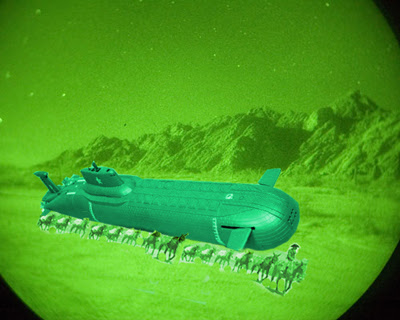 So of course, we must take action... and rather than using all the unbelievably superior surveillance equipment we (as the most technologically advanced nation on earth, who spends more on defense in a year than the entire planet does in three) must utilize an experimental -and no-doubt expensive- killer sonar, regardless of the fact that the blasts emitted from it can kill sea life because of its "sophisticated" technology.

Well I for one am not ashamed to say these TERRORIST EXTREMISTS in office are neither sophisticated nor honest. They have motives that again clearly show they don't care about anything but taking taxpayer money from the middle class, since they exclude wealthy and corporate citizens, and giving it to themselves via their corporate defense contracts.

Nevermind that polar bears have trouble swimming in oils slicks and really need that ice-cap to live on. Nevermind that whales, who's TRUELY sophisticated sonar has allowed them to talk to eachother across thousands of miles underwater for millions of years... No, Cheyenne wants to use some neanderthal sonic club to boom out an image so his undersea mercenary soldiers can spot the terrorists so bent on killing americans that they'd rather build sophisticated submarines than create electricity or running water where they live.... AND WE BUY THESE LIES!

Never have so many been so stupid for so long... but its not for the ruling elite not trying... this brilliant stupidization of the voter public, this consumerization of the citizenry of our nation has been long in making and vast in its execution... why even radical changes in planetary weather and plague-like disfunctions of insects, plants and sea creatures have not swayed the spell cast upon us. Vast exposés of their criminal antics are turned into conspiracy theories and the whistle-blowers have their character assassinated and are put to shame...

So on we go... now killing ever-more animals in our NEED for more advanced weaponry...

alright I took liberty to poke fun at our foolish nation and its ridiculous ways... so sue me.
Posted by the wingnut says... at 10:36 AM