What Does Democracy Mean?

Yesterday, citizens of Wisconsin went to the polls to decide who would represent their views and ideas in the November Election. At least thats what is supposed to happen in a primary election.

But what we are seeing start to happen here in Wisconsin... the first major primary after super tuesday and after the folding of the Republican party into one candidate... is something far more insidious and destructive of that fragile system we call democracy.

In large numbers, republican voters "decided" (well were instructed but thats the same word to these folk) -decided to jump ticket and vote for the democrat they felt most easy to beat in November!

Yep, thats republiklan for democracy... win at any cost, screw the will of the people, lie, cheat, steal - whatever it takes to keep in office... Oh, and do it wrapped in a flag wearing your lapel-pin with your hand cross your heart, mouthing the words to the national anthem -cuz you probably don't really know em after all! Hypocrites! We as a nation, starting here in Wisconsin, following Charlie Sykes' scheme to destabilize the democratic process (alright I'm giving sykes too much credit) have chosen to be as unethical as the very leadership we have all grown to dislike.

Is it any wonder our nation is in the condition it is? Economically strapped, more divided ideologically and financially than ever in history, acting more like an Imperial power than a representative republic, condoning treason, torture, spying, kidnapping and gross human rights abuses on a global scale, this cancer that has invaded our government has spread down to its citizens.

In 2006 the nation shocked Karl Rove and the GOP by turning out in such numbers to overwhelmingly defeat their agenda. An agenda that preached win at any cost, even if it means stealing elections. Many are still unaware of the antics employed by the radical wing of the GOP to secure the last four erections. But clearly the people were not represented in their vote.

And so today as many "citizens" take their "hot-showers" to cleanse the sin from jumping party-lines to vote for the lesser enemy, we see that the cancer has spread to the minions of the grand old party.

Just as we found in the last four erections, democracy is being transformed into some game like fear-factor or the apprentice... win at any cost, damn the rules or ethical behavior... damn the will of the people. Democracy has been turned into a winner-take-all cage-match with all the hype and pyrotechnics of a WWF pay-per-view event.

If we were to remove all the deceptor-votes from Hillary in yesterday's primary, she would have lost by a far wider margin of 18%... and Obama would have rightfully picked up more delegates... and the will of the people would have been heard. 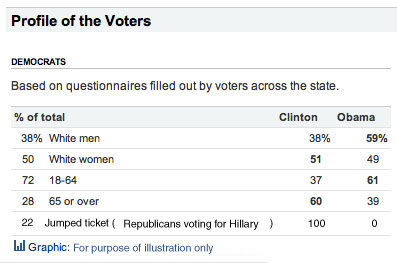 But yesterday, the cancer spread to the hypocrites as they decided to join in undermining Democracy... They decided their will was more important than the will of the people, than true Democracy. And now the trend has been established... Wisconsin forged ahead "Forward" to spread the cancer of undermining democracy... to the rest of the primaries.

Or perhaps it was here,
on the battlefields of Wisconsin's polling stations
that Democracy proved, as it did in 2006,
that the will of the people can beat
the cancer of unethical greed.

The bigger question remains,
Has the cancer spread to the super-delegates too?