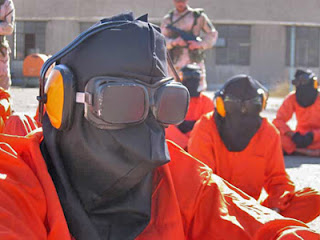 Today, Arlen Spector did a 180, now supporting Unitary Executive Privilege! Now he says FISA laws are antiquated...who's been over to pay him a visit? Bush speaks about Iraq... says the tv lies... don't believe your eyes... believe my lies! This must be what it was like to be a Jew in 1932 Germany.... difference being that Hitler WAS elected.


Please listen to this broadcast of This American Life with Ira Glass....search for Episode #310 Habeas Schmabeas 3/10/06 in the 2006 archive.

Tune to the audio story that discusses Habeaus Corpus. It is very interesting. The right of habeas corpus has been a part of this country's legal tradition longer than we've actually been a country. It means the government has to explain why it's holding a person in custody. But now, the war on terror has nixed many of the rules we used to think of as fundamental. At Guantanamo Bay, our government initially claimed that the prisoners should not be covered by habeas – or even by the Geneva Conventions – because they're the most fearsome terrorist enemies we have. But is that true? Is it a camp full of terrorists, or a camp full of our mistakes?

Who are the terrorists now?

PS. When Seton Hall Professor Baher Azmy discusses the classified file of his client, Murat Kurnaz, in ActOne, he is referring to information that had previously been made public and published in the Washington Post. That material has subsequently been reclassified.
Posted by the wingnut says... at 3:43 PM