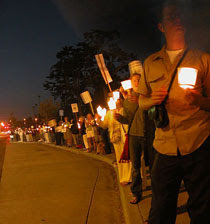 PeaceAction-WI organized a candle light vigil to commemorate the 2000th soldier to die in Iraq. Hundreds of people lined Lincoln Memorial Drive holding candles and carrying signs. Cars beeped their horns in support, some voiced their disdain for the message. Police on horseback stood watch on the perimeter and a few television crews were on hand collecting file footage.

Several leaders spoke at the event including myself. Here is the speech I gave at the rally in Milwaukee Wisconsin USA.

Unfortunately, another family of an American soldier has to make real the preparation for this day.

And now we gather to send out a message locally and to join people in cities nationally— to SPEAK TRUTH TO POWER- to say BRING OUR TROOPS HOME NOW!

We stand here today to tell the Bush Administration that a WAR BASED ON LIES will never succeed... That A WAR BASED ON LIES that sends our troops out to kill and destroy nations based on false fears and forced sense of duty... will not be tolerated.

We stand united with our soldiers in the knowledge that their duty and devotion to the founding principles of our great nation IS worth fighting and dying for!

But we also must stand together in our outrage against a system of corruption and manipulation that has misled our nation into acts of hideous aggression against people of other nations.

We must stand united in our sense of duty and patriotism to speak truth to power. To risk alienation, persecution and discrimination in order to end this unjust occupation.

We honor our soldiers and their role as defenders of freedom and liberty. We realize that their duty and honor is preserved by their strength and allegiance.

This strength and allegiance is also why so many families seem to object to our actions. For in battle they are trained to not ask why, but rather to do or die. Unfortunately for the families of the 2000 soldiers, this duty has become forever real.

But if their duty is to hold rank and follow command, then what is our role as citizens in this democracy? Are we not the conscience of our governing body? Do not we have the duty to question our leadership?

Our obligation to this great nation is not merely to march to the polls every two or four years to choose a leader--- to read a few talking points or sound bites and then pull a lever or pencil out a spot on a ballot card...

No our obligation is to put in office, leadership that we think will help advance our nation and be true to our sense of place in the world, AND to hold that leadership accountable for the trust and allegiance we granted them through our democratic election process.

It seems to clear that we as a nation have lax in our duty to hold leadership accountable. We are so busy trying to carve out a niche in this world for ourselves and our families... that we have slackened our duty to the Democratic process we so enjoy and defend.

But today we stand united, and today we are beginning to see once again that there is hope- That we the people will again hold our democratic process high and see that liberty and justice prevail over the abuse and greed, of the fear and contempt, that seems to have taken control while many of us were busy with our lives.

Today we mark a milestone, and today as further revelations unfold and incriminate the leadership of our great nation, we have the chance to take back our democracy,
to see that questioning authority, and speaking truth to power can bring about change.... can make right the wrongs, and can make us strong and sensible once again.

We are but one planet, with one people.... the sooner we realize this...the sooner we find the true way to end terror

through love and by peace.

thank you and keep growing the effort....
Patriotism is a duty not an elective.

Come out tonight- Bring forth your light -
Share in our plight - Keep real the fight....
to Make Peace our Right!