What lies behind the shocking images of torture at Abu Ghraib? Lets look at the history of the CIA and torture techniques. The International Committee of the Red Cross, Amnesty International and other human rights groups say the recently released images of abuse of Iraqi prisoners at Abu Ghraib show a clear violation of international humanitarian law. The U.S. made a pledge against torture when Congress ratified the UN Convention Against Torture in 1994 - but it was ratified with reservations that exempted the CIA’s psychological torture method.

A new expose gives an account of the CIA’s secret efforts to develop new forms of torture spanning fifty years. It reveals how the CIA perfected its methods, distributing them across the world from Vietnam to Iran to Central America, uncovering the roots of the Abu Ghraib and Guantanamo torture scandals. The book, written by UW-Madison history professor, Alfred McCoy is titled "A Question of Torture: CIA Interrogation, From the Cold War to the War on Terror." He also authored “The Politics of Heroin: CIA Complicity in the Global Drug Trade.” 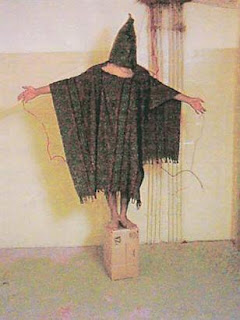 If you look at the most famous of photographs from Abu Ghraib, of the Iraqi standing on the box, arms extended with a hood over his head and the fake electrical wires from his arms, you can see the entire 50-year history of C.I.A. torture. It's very simple. He's hooded for sensory disorientation, and his arms are extended for self-inflicted pain.


And those are the two very simple fundamental C.I.A. techniques, developed at enormous cost. From 1950 to 1962, the C.I.A. ran a massive research project, a veritable Manhattan Project of the mind, resulting in the creation of the 1963 C.I.A. Counterintelligence Manual called Kubark. Spending over $1 billion a year they tried to crack the code of human consciousness, from both mass-persuasion and the use of coercion in individual interrogation. And what they discovered -- they tried LSD, they tried mescaline, they tried all kinds of drugs, they tried electroshock, truth serum, sodium pentathol. None of it worked.

What worked was very simple behavioral findings, outsourced to our leading universities -- Harvard, Princeton, Yale and McGill. The first breakthrough came at McGill. Dr. Donald O. Hebb of McGill University, a brilliant psychologist, had a contract from the Canadian Defense Research Board, which was a partner with the C.I.A. in this research, and he found that he could induce a state of psychosis in an individual within 48 hours. It didn't take electroshock, truth serum, beating or pain.

All he did was have student volunteers sit in a cubicle with goggles, gloves and headphones, earmuffs, so that they were cut off from their senses, and within 48 hours, denied sensory stimulation, they would suffer, first hallucinations, then ultimately a breakdown. And if you look at many of those photographs, what do they show? They show people with bags over their heads. If you look at the photographs of the Guantanamo detainees even today, they look exactly like those student volunteers in Dr. Hebb’s original cubicle. 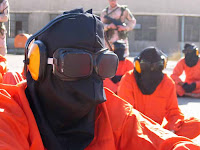 The second major C.I.A. breakthrough came in New York City at Cornell University Medical Center, where two eminent neurologists under contract from the C.I.A. studied Soviet K.G.B. torture techniques, and they found that the most effective K.G.B. technique was self-inflicted pain. You simply make somebody stand for a day or two. And as they stand -- okay, you're not beating them, they have no resentment -- you tell them, “You're doing this to yourself. Cooperate with us, and you can sit down.” And so, as they stand, what happens is the fluids flow down to the legs, the legs swell, lesions form, they erupt, they separate, hallucinations start, and the kidneys shut down.

The C.I.A. incorporated this at the Technical Services Division. Most of the in-house research involved drugs and all of the LSD experiments that we heard about for years, but ultimately those gave a negative result. All the drugs didn’t work. They caused disorientation and hallucinations, the information gleened through interrogation couldn't be trusted. But, what did work was this: Sensory Disorientation and Self-Inflicted Pain.

And in 1963, the C.I.A. codified these results in the so-called KUBARK Counterintelligence Manual. If you just type the word “KUBARK” into Google, you will get the manual, an actual copy of it, on your computer screen, and you can read the techniques. Read the report. But also read the footnotes, because that's where the behavioral research is. These findings produced a distinctively American form of torture, the first real revolution in the cruel science of pain in centuries, psychological torture, and it's the one that's with us today, and it's proved to be a very resilient, quite adaptable, and an enormously destructive paradigm. Let’s make one thing clear. Americans refer to this often times in common parlance as “torture light.” Psychological Torture, people who are involved in treatment tell us it’s far more destructive, does far more lasting damage to the human psyche than does physical torture. As Senator McCain said, himself, last year when he was debating his torture prohibition, faced with a choice between being beaten and psychologically tortured, I'd rather be beaten. Okay? It does far more lasting damage. It is far crueler than physical torture. This is something that we don't realize in this country. Now, another thing we see is those photographs is the psychological techniques, but the initial research basically developed techniques for attacking universal human sensory receptors: sight, sound, heat, cold, sense of time. That's why all of the detainees describe being put in dark rooms, being subjected to strobe lights, loud music, okay? That’s sensory deprivation or sensory assault. Okay, that was sort of the phase one of the C.I.A. research. But the paradigm has proved to be quite adaptable. 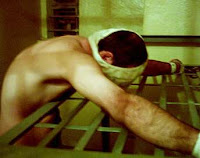 One of the things that Donald Rumsfeld did, right at the start of the war of terror, in late 2002, was to appoint General Geoffrey Miller to be chief at Guantanamo because the previous commanders were too soft on the detainees. General Miller turned Guantanamo into a de facto behavioral research laboratory, a kind of torture research laboratory. And under General Miller at Guantanamo, they perfected the C.I.A. torture paradigm. They added two key techniques. They went beyond the universal sensory receptors of the original research. They added to it an attack on cultural sensitivity, particularly Arab male sensitivity to issues of gender and sexual identity.

And then they went further still. Under General Miller, they created these things called “Biscuit” teams, behavioral science consultation teams, and they actually had qualified military psychologists participating in the ongoing interrogation, and these psychologists would identify individual phobias, like fear of dark or attachment to mother, and by the time we're done, by 2003, under General Miller, Guantanamo had perfected the C.I.A. paradigm, and it had a three-fold total assault on the human psyche: sensory receptors, self-inflicted pain, cultural sensitivity, and individual fears and phobia.

Now armed with these techniques, andthe Bush "Unitary Exuective Theory" the administration will be able to renegotiate the interpretation the Geneva Convention. Showing they will not physically harm prisoners... but will attain their objectives through much crueler methods, PsyOps.
Posted by the wingnut says... at 5:55 PM